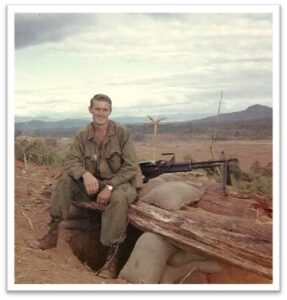 Bill and I were the very best of friends. We both served in 4th platoon of Delta Co. 1st Battalion 12th. Infantry of the 4th. Infantry Division.  We fought to the top of Hill 875 together along with the 173ed. to victory over an overwhelming 7,000 NVA enemy on February 26, 1967. In taking the Hill, I was wounded twice and was awarded the Purple Heart. Bill and I then went on to the 1968 Tet Offensive. Fighting began on January 30, 1968 on through February 30, 1968. We fought in and around Kontum and Dakto, Vietnam for that month.

Wild Bill carried the M-60 MG. The image of Bill sitting on our bunker next to his M-60 was taken just before he was killed by a B-40 rocket atop Dog bone FB. We had humped all day long and when we got to the top of the FB. We rebuilt our defensive bunkers right off. When we finished, I said to Bill, “You look like Hell”. He said you look like Hell too! We decided to get cleaned up a bit so we got out our half full canteens and steel pots and went to work. After the spit shine, Bill gave me a C-rat cup of coffee he had heated-up with some C-4 explosive. We both sat there smoking a cigarette and drinking a bit of instant coffee and talked about the day and the fact that we had made yet another day alive. I took this picture of Wild Bill because he said to me, “No one will believe I am this handsome. Besides maybe once the film gets back to the world and developed you could have it sent to my fiancée. I know she would like to see it!” Just a few minutes later he was killed. The date was February 8th, 1968, 52 years ago.

We both heard the pop of mortars being fired from below, the call went out, “INCOMING”. Bill’s last words I heard were; “Dam those ———–“. The NVAs also fired a B-40 and as Bill dove for his bunker that round followed him in. Bill was killed by that rocket. I heard what we all dreaded to hear, “Bill is hit”. All knew how close I was to Bill and I was told to stay back as there was nothing I could do. Bill was snapped into a poncho. I went up to Bill before the Huey came in, I cried over the great loss of my friend. I told him, I would not forget him, he was my friend.  My very best friend in the Nam.

52 years have passed since that February 8th night in 1968 when one of this Nation’s very best gave his very best. Bill didn’t return home to his fiancé and unborn child back in Maine. He would have been a great husband and father, but that was not to be. Each time I go to Washington, D.C., I go to the wall and leave an 11 x 17″ picture narrative of Wild Bill Harrington. It is titled, the “Long Green Line”. I miss Bill and trust he is in the “Mansions of the Lord.”

By US Military Academy Glee Club and Metro Voices

The Wall of Faces, Vietnam Veterans that were killed in action.
https://www.vvmf.org/Wall-of-Faces/21518/WILLIAM-F-HARRINGTON/