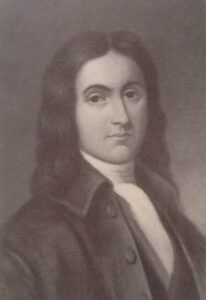 One of the revolutionary patriots who voluntarily incurred the greatest degree of suffering without any possibility of individual gain.

He served with distinction in the pre-Revolutionary Legislatures of New Jersey. In 1765 he was one of the first to recognize the tyrannical character of the Iniquitous Stamp Act. During the enemy invasion of New Jersey, Hart was besieged in his farmhouse. His wife lay dying at the time.

He refused to leave her. After her death he managed to make his escape, and for a year he was hunted through the woods, where he existed as a common exile and fugitive, eluding every effort of this pursuers.

An old man at the time, he never lost his spirit and joined Washington’s Army after the Battle of Princeton. 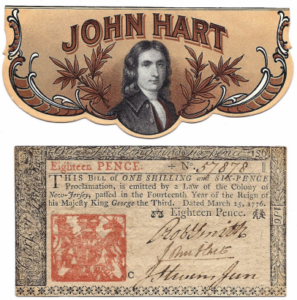 In 1774, he was elected to a committee to “Elect and Appoint Delegates” to the 1st Continental Congress to protest The Tea Act. In 1776 he was designated one of the officials to sign the new Bill of Credit notes issued as money for the State. He signed each of the notes issued for the Western New Jersey Division of the Treasury – 15,583 legibly signed. He was paid 12 pounds 10 shillings and 10 pence,which was about the value of 3 muskets.

In May he was reelected to the Provencal Congress. On June 22nd he was elects as one of 5 delegates to the 2nd Continental Congress – on July 4th, 1776 he signed the Declaration OF Independence.

John Hart died owing money, and due to the shortage of hard money, depreciation of Colonial money, and a glut of land on the market as Loyalist land was confiscated and sold, most of his property was sold for a pittance.