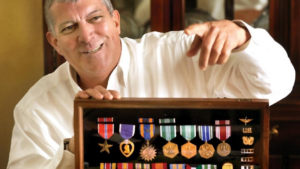 Steve served as an Army Aviator for 28 years before retiring at the rank of Chief Warrant Officer 4 in 1998. Still the flyer, Steve has logged in excess of 20,000 flight hours on a global scale and in a wide variety of aircraft and circumstances. He has flown military, corporate, commercial, and freight operations; in desert hot, Alaska cold, to tropical humid and transoceanic and intercontinental environments. He is also a writer, a great husband and for me, a great friend!

If Medford resident Steve Deaton didn’t have the papers and photographs to document his tales, they would raise more than a few eyebrows.

“My military experience was all out of the norm — not the standard track,” he acknowledged. “But everything, except going to Vietnam, was voluntary.”

Consider this: He was born on Veterans Day — Nov. 11, 1950 — in the U.S. Naval Hospital on the Marine Corps Base at Camp Pendleton, Calif. And his official military discharge as a chief warrant officer 4 from the Oregon Army National Guard inactive reserve is effective today — Nov. 11, 2010 — at age 60.

He flew 650 combat helicopter missions in Vietnam, where he was shot down and received the Air Medal for Heroism for saving his crew.

He also earned the Bronze Star and a Purple Heart in Vietnam. That was before he flew fixed-wing surveillance between South and North Korea, and piloted a newfangled airplane — he learned to fly it en route — from Northern Ireland to the Middle East just in time for Desert Storm in 1991.

Small wonder his wife, Susan, fondly refers to him as “Forrest Gump” when it comes to his military experience. However, unlike the character in the 1994 movie starring Tom Hanks, he is neither slow-witted nor does he stumble accidentally into historic events.

“From my birth to the time I went into the Army, my dad was always in the Navy,” Deaton said. His father retired as a master chief after 28 years.

“As a result, I felt like I spent my whole childhood in the military, having grown up on every Navy base from Alameda down to San Diego.

He was actually drafted into the Army just before his 19th birthday. But after training as a military police officer, he volunteered for flight school to fly helicopters.

Newly minted Warrant Officer 1 Deaton arrived in what was then South Vietnam early in November 1971. It would be his home for the next year.

“After first landing in Saigon in ’71 and the door opened, I remember distinctly standing at the top of the stairs with the overwhelming foreboding feeling of impending doom,” he said. “I thought I would walk down those steps and never get back on a plane again.”

His orders took him to the 187th Assault Helicopter Company at Long Binh. Its mission was to ferry troops in and out of combat aboard UH-1 Hueys.

Shortly after he arrived, he climbed into a Huey to fly in the middle of an 18-helicopter formation into combat.

“We were heading to a hot LZ (landing zone) with a load of combat troops,” he recalled. “Number two and number three helicopters in the formation collided. Killed everybody.”

Because the terrible accident was so devastating to their morale, all the pilots were reassigned. He was sent north to the 4th Air Cavalry at Hue, where he remained for the rest of his tour.

“I went from a lift company that had been totally demoralized to a hunter-killer team,” he said, noting the heavily armed helicopters were sent out on “night hawk” missions.

“We went out at night to hunt for bad guys to help out the remote firebases, keep them secure,” he said.

But the steady flights into harm’s way wore on him and the machine.

“My helicopter had so many bullet holes that it flew like a pig,” he said. “Nobody else would fly it.”

Hence the painting of a pink pig on its nose in his old photographs.

After six months, the stress of the nighttime flights began to get to him.

“I wasn’t eating right — wasn’t sleeping right,” he said, adding that he was finally rotated back to daylight flying.

His luck — and that of the aircraft — held until April 28, 1972. On that mission, they were hit hard while supporting ground troops in a ferocious firefight near Hue.

“We got hit by machine gun fire but were able to successfully auto rotate so I could put down in a rice field,” he said. “The North Vietnamese Army was coming to claim their prize — us. So we fought a running gun battle on the ground for about 50 minutes until some other Army helicopters came in to get us out of there.”

He would receive the heroism medal for saving his crew during that mission.

Perhaps his closet call came on Sept. 8, 1972, while he was again supporting ground troops engaged in combat. A projectile ripped up through the floor, just in front of his feet.

“It went up through the dashboard and out the top of the helicopter,” he said. “I don’t know what it was. It was big.”

Shrapnel slammed into his face and upper chest.

“But I kept doing what I had to do to get us out of there,” he said.

He stopped talking for a moment to study an old photograph of him and three other pilots in Vietnam. They are all wearing cavalry hats and shorts and holding M-16 rifles.

“After being shot at and shot down, the four of us said we are never going home unless we made it happen,” he said. “So we became very ferocious in what we did to survive. We made sure we were not going to be killed. The only way to do that was to neutralize as many people as we could before going in.

“But that was our job — hunter-killer teams,” he added. “Our business to go look for bad guys and shoot ’em.”

Deaton, who periodically visits the Vietnam Memorial in Washington, D.C., to pay respects to his old buddies who didn’t make it, said he mostly feels sad about the Vietnam War.

“I did what I was called to do,” he said. “For that, I have no regrets. May not have believed in it but it wasn’t my place to question it.

“My experience didn’t prohibit me from doing something more with my life,” he added. “I always wanted to look over the next horizon.”

After completing his Vietnam tour, he got out of the Army and went to college, earning a degree in political science from California State University, Chico. But he missed flying and got a job piloting helicopters for a logging firm in Oregon. When logging work became scarce, he became a police officer in Ashland, then joined the department in Portland.

It was while working in Portland that he joined the Oregon Army Air National Guard. He flew helicopters for a while, then learned how to fly fixed-wing aircraft.

He began flying an OV-1 Mohawk surveillance plane and joined the Guard full time. He was assigned to the regular Army and sent to South Korea to conduct nighttime patrols along the 38th Parallel in the late 1980s.

When he returned from Korea, he remained full time in the Oregon National Guard. His mission included flying surveillance along the border with Mexico to track illegal immigrants.

He stepped forward once again when Desert Storm began early in 1991. Once more he was temporarily assigned to the Army.

His mission was to pick up a new C-23 Sherpa in Belfast, Northern Ireland, and fly it to Kuwait where it would be used to ferry cargo and troops.

“I learned how to fly it en route,” he said. “After we took off from Belfast and got over the English Channel, I started doing slow flight and stalls to try to figure out how to fly it.”

Photographs of the Sherpa reveals an ungainly looking craft with a square fuselage.

“It looks like the box the plane came in,” Deaton quipped. “It flew like a box. You had to manhandle it.”

He flew it for six months in the Middle East, then flew it back to Oregon where it became a workhorse for the Guard. 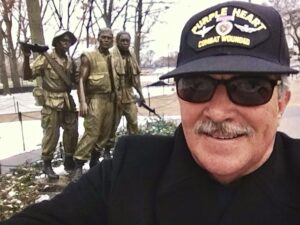 Until earlier this year, Deaton flew a Global Express jet for a Japanese business out of Guam, traveling the world. He continues to work as a contract jet pilot.

Meanwhile, his retirement papers after 20 years in the Guard arrived Oct. 27 in the mail. It is effective today.

“As of Thursday (today), I am officially retired from the military,” he said, adding somewhat wistfully, “It has been quite a ride.”