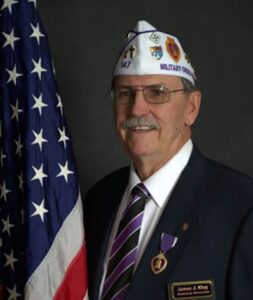 At 20 years of age after my second year in the California College system and ready to start my third year with a major in architecture and a minor in business I was drafted. The year was 1967 and the Vietnam War was ramping-up. Basic training was at Ft. Ord, California and advanced infantry training was at Ft. Polk, Louisiana. My MOS was 11C20, light mortars. This training prepared me for deployment to Vietnam. However, once in country, I served as an Infantryman, 11Bravo. For the next 12 months I served as a gunner carrying the M-79 grenade launcher with the 1st Battalion 12th Infantry, 4th Infantry Division in II Core Central Highlands. Among the most intense battles I fought in was the November 1967 for Hill 875 where I was first wounded and was awarded the Purple Heart for wounds received in action. The next intense battle was the two week long 1968 TET Offensive. Instead of returning home after my year tour, I was asked to extend by the new Battalion Chaplain, Captain William Harrison. I stayed for another 7 months as a 71M20, Battalion Chaplain’s Assistant for the 1st Battalion 10th Calvary 4th Infantry Division. My total time in Southeast Asia was 19 months.  My final rank at separation for the Armed Forces and Reserve was SSG Staff Sargent.