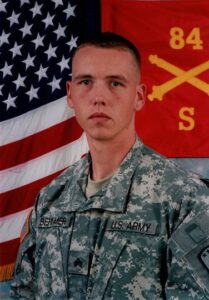 I was born to a teenage mother and a father that I barely knew as a child. I didn’t know much about my mother and fathers family until I was older. My maternal grandfather’s side kept a safe distance from my mom and her chaotic life.

On my mother’s side of the family, many served in military service which I mentally latched onto. I looked proudly at their courage, discipline and sacrifice which they willingly gave to our country. Coming from a childhood of abuse, poverty and food insecurity, I decided that I did not want to lead a life of those circumstances. The strength, determination and motivation I so wanted as a child helped me leave home at an early age and start my life on my own.

I sometimes took wrong turns as my parents had done but I eventually corrected course to make something of myself. I finally understood that no matter what life handed you as a child, you could find your own inner strength to guide you to become the person you wanted to become. My poor upbringing had taught me to never to give up on whom I wanted to be in life and I knew my path forward was through military service. I then enlisted in the Army and never looked back to the life that I was born into.

I am a retired Army Sergeant having joined as a 13B Field Artilleryman, I was quickly repurposed overseas to meet the need of the war as a vehicle gunner on Combat Patrols, Combat Logistics Patrols and Combat Recovery Missions. I served in this capacity during my deployment to the area of Baghdad, Iraq in 2008 during the Iraqi Surge and Iraqi Sovereignty campaigns. Then on Combat Patrols in Logar Province, Afghanistan in 2010 during the Consolidation III campaign. During both deployments I was based out of Germany, first from Baumholder with 4-27FA, 2BCT, 1AD and later out of Bamberg with 173rd ABCT. 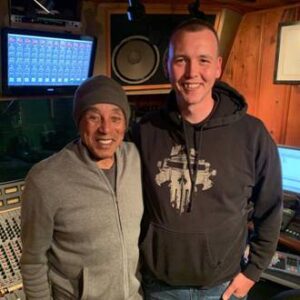 Working with one of my musical idols, Smokey Robinson

During my youth, my escape from reality was music. I did not have formal training when I was younger, beyond the recorder and maybe a year of violin, but music was my saving grace. Something I connected with and felt I could have shared feelings with others, even if it was just my interpretation of their lyrical and instrumental intent. An uncle I always looked up to, who was a Navy Veteran, played guitar and my father also did at a young age. Receiving a guitar in my teens from my Grandmother was my reintroduction to an instrument and later became a connection to my father and my uncle. I quickly became interested in being able to make myself and other musician’s sound better. I looked at audio engineering as an option prior to joining the military but lacked the motivation as an addict. The Army was largely my motivating factor to escape who I was becoming. Once I retired out of the Army, I went on to attend Musicians Institute for Guitar Performance. After realizing I did not like being put in the spotlight and on stage, I graduated with my AA and enrolled into their Audio Engineering program. I quickly caught on and have loved the journey ever since.

What prompted me to join the American Heroes Network team was largely due to two factors; the mission and the team. I come from a long line of military veterans on my mother’s side of the family. A majority of us are Purple Heart recipients, so this mission is close to my heart. I’ve always wanted to find a way to give back to Veterans and hopefully make an impact on any that I am able to. American Hero’s Network’s mission strongly aligns with my goals that the founder of AHN, James Klug has built from his heart. I couldn’t be more excited to be a part of this team and the critical mission to provide Veterans with a place to tell their stories and access resources for those in need.